In the 21st century, Thomas L. Friedman’s (2005) famous book said that we all play in the same economical, capitalistic, and political set of rules, consider as ‘level playing field’ and ‘world is flat‘. Now, Augmented Reality (AR) tries hard to break the rules and redefine the physical environment with capitalism. Thus, the world is a dynamic screen.This essay argues that augmented reality (AR) is a capitalist subject that turns the concrete world into a dynamic environment. I first demonstrate the short history of AR, closely focusing on how it has changed the purpose of education tool into a commercial product. Second, paying attention to how AR benefits business and elites in commercial chain. Then, depicting the discrimination and inequality in a lower social-economic status. Lastly, discussing the young need to face problem of privacy concerns and increasing distraction in the dynamic world.  Thus, I conclude that AR redefines our understanding of a world and make it more interactive and dynamic within the capitalistic context.

What is Augmented Reality (AR) ?

Augmented reality (AR) has different terms depending on its context. In the political aspect, “AR is a technology of surveillance” which might raise the issue of data collection and privacy regulation (Pesce, 2020). As for the economic aspect, Grandinetti and Ecenbarger (2018) use Deleuzian’s spatial materialist method to discuss AR as the ‘capital production’ that generates desire and manipulates power in society through the locative application. Combine these definitions, I define that AR is manipulated by capitalist power and in favor of subverting the fixed world into a utopian illusion socially, economically, and politically.

AR can manipulate abundant data and simulate the real situation precisely in a short time (Pesce, 2017). This time-consuming technology can bring sufficiency and effectiveness to the training process. Even now, there is company try to use AR for flying training and car training. Here is a video introduction for Samsung & 3spin cooperation in Aviation Training.

It is said that this training can lead to the educational aspect. As for the learning tool, AR still needs time to develop. A recent study (Bacca, Baldiris, Fabregat, Graf, & Kinshuk, 2014) shows that motivation and interaction are the main advantages of using AR in the education aspect. With its interactive attribute, AR then evolved into an entertainment product.

In 2000, AR Quake is the first AR game that combines with a head-mounted device to experience the virtual world. Then, the coming of games or applications in mobile phones, such as Google map’s street view in 2007, has put AR into a commercial chain. Space started to be commercialized and dynamic when the map show different paths to a destination and recommends the best way (Boyle, & Rivers, 2018). The environment is going to be unstable when AR mixed reality with the purpose of capitalism.

As AR improving, it becomes more portable, flexible, and mobile. For example, Google Glass, Microsoft HoloLens, Apple Watch, and so on. They are the consequence of the ubiquitous internet (Kalantari & Rauschnabel, 2017). People want devices that are close and portable. Below is a YouTube ad of HoloLen 2 which can be used in the medical, mechanical, and leisure sphere.

Along with the internet, the company can make a profit by collecting data from the app and bring virtual utopian illusion to users at the same time.  Hence, AR technology is more dynamic and sociable in a commercial way.

2. AR benefits the elites while ignores the others

In the political and economic sphere, AR benefits high social status members. Company, professionals hold the power to design, control, manipulate the data collection. Company or producer like Niantic (Pokémon Go) and  Google, using a locative app to cooperate with the AR game experience. Here is the image of how overwhelming virtual monster show on google map. 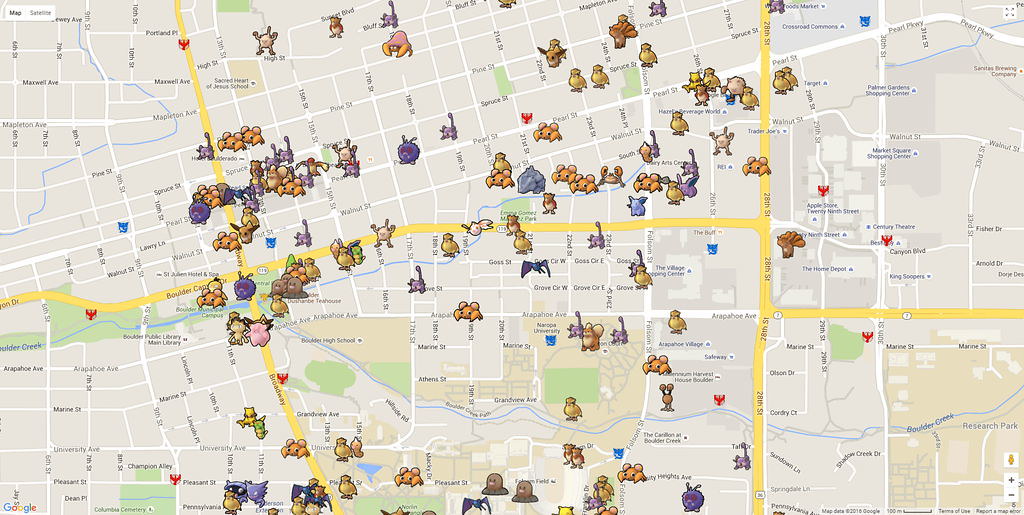 It is ‘territorial control’ that Google captures the data and have power for analyzing data for advertising (Boyle, & Rivers, 2018). This commercial purpose is the main concern for companies to throw a huge bunch of money to investigate AR. Sensor Towers‘ infographic shows the nearly $900 million revenue of Pokémon Go in 2019 (pokemon-go-worldwide-user-spending-by-year.jpg). Furthermore, Grandinetti and Ecenbarger (2018) found out that news is capitalist subjectivity that demonstrates the positive influence of Pokemon Go as a ‘stress relief’ app.

Meanwhile, experts and professionals have more technological and digital abilities to use AR.  According to Microsoft HoloLens Ads, it pointed out doctors and mechanics as users of this high technology. The early adopter of AR is the group who has already had relatively high social-economic status. Kalantari and Rauschnabel (2017) discussed that ‘usefulness’ and ‘hedonic motivation’ are the benefits for users then pushing the AR to broad acceptance. The concern of usefulness and enjoyment is a capitalist idea that is profit-oriented for a particular use. Not only do the users need to have a high social-economic background, but users also use it for gaining profit commercially and psychologically. Hence, AR is a game in capitalism.

However, AR ignored people who are in a lower social-economic status. The dynamic virtual world is the mixed reality that overlaid the real (Kalantari, & Rauschnabel, 2017). That is to say, it can distract users’ attention and lead their attention to what AR wants users to see. They fall into the ‘perfect’ illusion world and forget to see the real problem behind the AR world. The image is a sign that wants people to remind the real world. 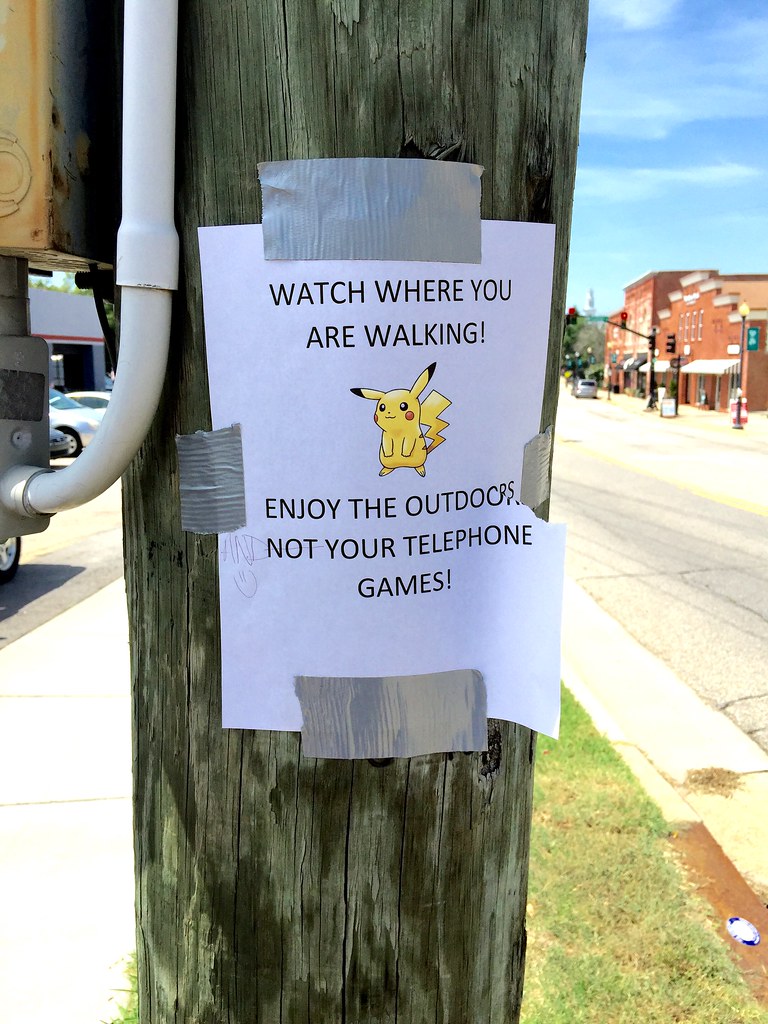 “Pokemon Go” by MarkGregory007 is licensed under CC BY-NC-SA 2.0

Homeless, black, poor, or disabilities are all passive and active kicked out of the AR world. Economically, they don’t have finical affordability to have the device. They actively stand at the outside of AR technology. Socially, AR games like Pokemon have problem with locative discrimination and inequality. Boyle and Rivers (2018) found the issue that Pokemon put fewer portals in the black neighbor when comparing to the white neighbor. In this way, they are passively ignored by the AR. The problems of racism and discrimination seriously happens in the dynamic world and makes it worse. This explains that inventors need to be more conscious of the social issue underlying in the real world.

In the future, AR might be used in education. Students have to face a dynamic and interactive world. Here is a tweet showing how AR could work in the classroom.

Even on the way to school, the path is interactive and dynamic due to AR. The tweeter post gives a view of an interactive bus stop.

AR makes the waiting time at bus stop interesting and exciting. Do you want this technology in your neighbor? Will it bring chaos just like Pokemon Go in some public area? #arin2610 https://t.co/E2kYArlfjq

In dynamic environment, students need to worry about how to fit into the AR world. With the internet and AR technology, our world is under surveillance and distraction. For privacy, companies can manipulate the data of users and bystanders around them. The data capture is ubiquitous. The idea of ‘surveillance capitalism’ is  exemplified that Pokémon Go make users spend real money in the commercial process to let Niantic manipulate its market in the future (Zouboff, 2019). The company would gain the data when users are using the device. Then, company can sell the data to a third party for the advertising market (Kalantari, & Rauschnabel, 2017). If it is unavoidable for our generation to use AR in study, users have to find a way to protect personal data. At least, we should understand how the company collects data and how it cooperates with a third party. Self-consciousness is important when the environment is dynamic.

As for distraction,  AR makes concentration difficult. There are illusion and filter to distract users’ attention from reality. The study found that the limitation of AR learning is the distraction of virtual objects (Bacca et al., 2014). The world is a mess when there is information that keeps popping up in front of your face. Here is a film Hyper-Reality that portrayed an AR world which is a mess and dangerous.

Thus, the young generation has to be self-conscious and self-discipline in this dynamic world.

In sum, AR is a capitalist product that breaks the traditional concrete world into a dynamic world that is  hard to control. Companies and elites who involve in the commercial chain benefit the most while vulnerable groups are ignored in the virtual world. High social-economic status is a privilege because they have digital literacy, social power, and capability to use innovative technology; even to gain profit from it. To find a way of living in a dynamic world, ordinary users need to be more conscious of personal data and pay more attention to subjects that are not seen in the virtual world.

About Ann Peng 2 Articles
I am from Taiwan. I love watching movies, reading novels, having great food, and taking picture. Where I live is a place full of delicious food and nice people. I am happy with meeting new people and sharing my favorite movie with you!!!
Twitter

Youtube has transformed the way we interact through, in and around video media. In creating a participatory video sharing service platform, YouTube has flipped traditional communication broadcast systems on its head giving everyone the chance […]