Rough Ride Ahead with End of Net Neutrality, Business Journal, All rights reserved

To begin with, according to Reicher(2011, p.734), the conception of “net neutrality” refers to a series of open access standard implemented in various juridical and technological methods. In this way, net neutrality is usually related to the standards that direct the solving of traffic flowing over Internet networks (Bello and Jung, 2015, p.62). As shown in the above figure, there is a difference between net neutrality and without net neutrality. The net neutrality tends to distribute the same channel to all users. Without net neutrality, the large companies and net neutrality have occasionally been a fringe concern on the public agenda for the past 15 years(Pickard and Berman, 2019, p.71). In order to pursue the historical background of net neutrality, it links to the early debate. The debate over net neutrality goes back to the 1990s in the United States. At that period of time, Internet service providers aim to create an internet of tiered services. For the discussion of network neutrality, this paper combines common carriers and Universal Service Obligations(USO) these two concepts for a more in-depth analysis. To some extent, these three conceptions seem to have reached a consensus and have the same contractual relationship. Universal Service Obligations (USOs) are a common application in many different businesses which involving telecommunications, energy and express mail services (Gautier and Wauthy, 2012, p.254). The nature of this universal service obligation is also related to impartiality, transparency and technological neutrality. The conception of the common carrier was imported from England as a segment of the common law(Farris, 1967, p.29). The basis of the conception of the common carrier is based on four responsibilities or agreement that must be performed by these certain enterprises(Farris, 1967, p.30). 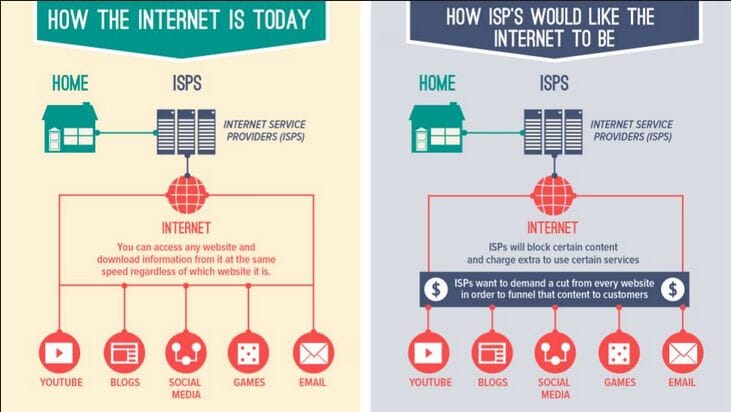 Net neutrality gives digital audiences the right to be treated equally by the Internet. Net neutrality is treated equally for different races, social classes, occupations, ages, genders, etc. In the Australian internet industry, there is a benefit for the internet platform like YouTube and Facebook choose to obey the rules of net neutrality. It is commonly aware that Australia is a multi-ethnic and multi-cultural country. The environment of the Internet is widely concerned, which makes equality particularly important. For a modern, pluralistic Australian online environment, the lack of net neutrality can create a chaotic Internet environment.  The function of common carriers may diminish in the future, whereas this conception will remain to exist because it fulfills a relatively authentic social demand (Farris, 1967, p.33). This real social demand can be understood as the equal social transport obligation of everyone. The conception of common carrier assured all transporters from exploitation (Farris, 1967, p.32). Besides, the transparency of net neutrality is also a strength for the digital audience. For instance, transparency of Internet platforms with respect to user information. According to Reicher(2011, p.736), transparency is an indispensable factor in maintaining an equal Internet environment. Indeed, the modern digital user aware of the risk of lack of transparency. The four commissions of common carriers are “the duty to serve, the duty to deliver, the duty to charge reasonable rates and the duty to avoid discrimination” (Farris, 1967, p.30). From this point, it seems the common carrier protects the rights of carriers. This at least protects users’ freedom of speech and information transparency to a large extent. Universal Service Obligations could be commonly separated into two segments include quality obligations and price obligations (Gautier and Wauthy, 2012, p.254). Thus it can be seen that the advantage of maximizing network neutrality is to find a balance between price obligation and quality obligation.

However, without network neutrality, the Internet can provide high-quality services to specific groups. Internet service providers should be able to provide hierarchical services so that their content and application providers can provide quality-guaranteed audio and video services. For instance, Netflix and Spotify apply this strategy to offer a good content experience to the internal audience. It seems that this way plays an important role in the net environment. Apart from high-quality services, another against net neutrality is after the platform gets the funds for profitable investment, the enthusiasm for innovation will be higher. Online users hope that the Internet environment can become an open space for innovation(Bello and Jung, 2015, p.67). In this era of the rapid development of science and technology, many Internet companies want to break through the limitations of the traditional system to maximize innovation. Nevertheless, the differential treatment of Internet users will lead to the uneven quality of service. For example, low-income online users do not receive quality services because they cannot afford to pay for expensive online services. To some extent, this aggravates the contradiction between the bottom users and the upper users. Moreover, it increases the burden of regulating and managing the whole Internet environment(Bello and Jung, 2015, p.69). Based on the above pieces of evidence, it reflects that the debate of net neutrality is essentially about the contest, asset transaction, and novelty in the network ecosystem(Bello and Jung, 2015, p.63). In short, net neutrality should be applied in the Australian context.

Cossler, J.(2018) Rough Ride Ahead with End of Net Neutrality. Retrieved from https://businessjournaldaily.com/rough-ride-ahead-with-end-of-net-neutrality/