What is the Creative Commons?

The Creative Commons (CC) located at the Stanford Law School was established in 2001(Schloman, 2003). It is the theorists and practitioners of technology and law’s cooperative achievement to balance the world of public domain and copyright and gains support from the MacArthur Foundation and the Center for the Public Domain . It provides a free set of the copyright for public use (Schloman, 2003).

Based on the current copyright laws, creators’ works which match the qualifications of copyright will gain full copyright protection automatically. However, lots of people do not want to use the whole rights of copyright law. The reason is that full copyright protection will become a hindrance in the aspects of introducing and spreading works extensively. Works are awarded protection also break the balance between the protection of publishers and creator’s rights and the demands of society to increase promotion in the arts and sciences (Schloman, 2003). The appearance of Creative Commons is a kind of a legal mechanism for individuals so that they can select the rights they want to keep and those that they can give to others (Schloman, 2003). It aims to allow users to exercise works more freely under certain requirements.

How to use it?

There are four optional rights which are attribution, noncommercial, no derivative works and share alike for creators to match and mix (Schloman, 2003). 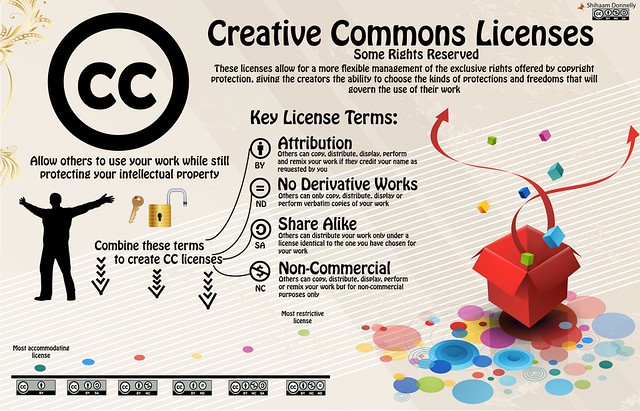 Among the 16 creative commons licenses that these rights are combined with each other, six are the most commonly used types. 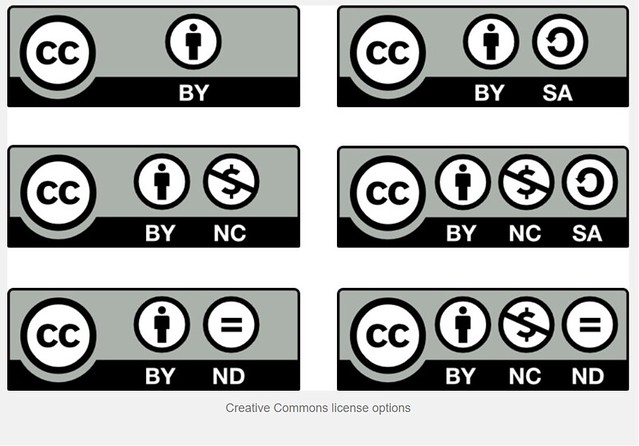 There is a video that helps people understand how these licenses work:

Who owns the key business？

From the perspective of Creative Commons licensors, they acknowledged that they owe intellectual debts to other authors (Kim, 2007). In other word, CC licensors’ cultural output is dependent on the work of others rather than on their own. This perspective is in line with the public policy vision of copyright, which admits all original works are partly derivatives because of the intellectual debts to prior creators (Kim, 2007). Compared with private property, which focuses on the author’s ownership of the work, the Creative Commons pays more attention to the role of the public domain in authorship (Kim, 2007).

In the aspects of private property, the author transfers the contract of full copyright law to the publisher. Publishers continue to update diverse books and journals to meet the interests of the public, so the improvement of public interest contributes to the success of the publishing industry (Kim, 2007). The publishing industry can control the key business. However, CC licensors promote the development of cultural commons which people can use by allowing the production of derivative works, non-commercial use and the same licensing method as the previous author for the dissemination of subsequent works (Kim, 2007).

So, the Creative Commons’s aim is to simplify the legal consumption associated with using copyrighted work by operating licenses, especially those companies with non-profit purposes (Lamlert, 2014). It is a non-profit organization.

Who benefits from the Creative Commons？

There are three different groups of creators can be served by the Creative Commons. The first group is people who trust the public policy vision’s copyright. They use CC licenses because they are eager to create and contribute to the intellectual commons to gain self-satisfaction (Kim, 2007). The second group is composed of those who expect his work to be widely disseminated without compensation (Kim, 2007). In this process of their work being widely available on the internet, they can gain recognition from others and build a good reputation. The third category of people is those who want their works to be extensively disseminated and receive monetary compensation (Kim, 2007). While so many licensors do not use the money earned from copyrighted works as the main source of living expenses, those who are depending on their copyrighted works have high economic returns (Kim, 2007).

In terms of users, they will be given some basic rights when they choose CC licenses.

User can use their rights to:
a. copy and spread the production;
b. exhibit or perform the production; and
c. transform the work into another format consistently (“Fact sheets”, 2013).

For example, there is an Open Educational Resources (OER) which are the advantage of using CC licenses. It represents learning, research and teaching materials in any medium can be used freely and repeatedly (Lamlert, 2014). In particular, educators can share, find, combine and construct courses, lesson plans and textbooks easily and freely (Lamlert, 2014).

But when users possess these rights, they also have obligations:
a. Without permission, no behavior prohibited in the license shall be performed;
b. All copies must retain the original copyright statement and license link;
c. Do not use technical means to restrict other people’s legal use of the work;
d. The content of the license must not be changed;
e. Indicate the changed place and its original work;
f. When using the work, do not damage the reputation of the original creator (“Fact sheets”, 2013).

Who not benefits from the creative commons?

With the development of the Creative Commons for recent years, CC probably have changed from a tool of collaborative sharing and streamline creativity to a tool for scrapers, spammers and others to earn profits and take shortcuts (Bailey, 2015). These spammers and scrapers always just meet the minimum standards of requirements on the license and use materials in a way that they contribute as little as possible to the return of materials (Bailey, 2015). This situation shows the Creative Commons’s shortcoming of managing reuse rights. Because of these low-quality reuses, spammers can create questionable accounts, and one or two videos or posts in the accounts may attract widespread attention (Bailey, 2015). But for original creators who like to create, this kind of widespread attention not only failed to bring actual benefits, new audiences and creative use, but also caused creators to receive the penalties of search engine penalty and website damage due to the massive reuse of spammers (Bailey, 2015).

Moreover, a part of users also has to bear the trouble caused by a large number of false reuses. While their need to find original authors is hindered, their trust in CC licenses will be reduced, and even their desire for creative use of original works will be undermined (Bailey, 2015).

In summary, the Creative Commons builds a balance between the traditional copyright law and public policy vision of copyright law. Second, CC licenses provide multiple private interests for licensors, such as individual satisfaction, the opportunity to build a reputation and economic benefit (Kim, 2007). Third, there are some troubles caused by the poor management of reuse rights. However, some of the loopholes in its management that need to be rectified do not affect the protection of copyright on a large scale by CC. Beyond that, the emergence of CC has enhanced the public’s awareness of the relationship between copyright and creativity and freedom.

Bailey, J. (2015). “Why I Am Backing Away from Creative Commons?” Plagiarism Today. https://www.plagiarismtoday.com/2015/08/12/why-i-am-backing-away-from-creative-commons/

Schloman, B. (2003). Creative commons: an opportunity to extend the public domain. Online Journal of Issues in Nursing. Available: www.nursingworld.org/MainMenuCategories/ANAMarketplace/ANAPeriodicals/OJIN/Columns/InformationResources/CreativeCommonsAnOpportunitytoExtendthePublicDomain.aspx

2020-11-22 Irene Chen Alibaba, arin2610, Assignment 3, Taobao Comments Off on Taobao – A Platform That Has Changed Chinese E-commerce Market for the Past 17 Years

“The virtue of the Internet is that it uses small to compete with big, it uses fast to compete with slow.” (Liu & Avery, 2009, p.50) — Jack Ma INTRODUTION Taobao, a Customer-to-Customer(C2C) and Business-to-Consumer(B2C) trading […]