In 2020, with the widespread use of smartphones, the number of users of WeChat has increased dramatically. The active users not only in China but also more people in different continents overseas have begun to try to use WeChat to socialize. By WeChat’s platform privacy features and a variety of different functions like scanning QR code and WeChat payment, WeChat almost comparable to Facebook. WeChat and messenger are both social software. Messenger is to expand and attract more applications with itself as Facebook, and WeChat is to expand the portable small program on the original social platform. They both have the same purpose, both for social software to remain competitive and can be further developed. The emergence and strong strength of WeChat have brought innovative effects to traditional social platforms and software.

This picture shows now of the world’s top 5 apps in 2013, and WeChat is #1 amongst messaging apps.

WeChat is a tool for online communication software. It is been created in 2011 in China by the Tencent company started as instant messaging applications. ( Gan, 2016). In WeChat, users are mainly active in China. WeChat is similar to much other software in western countries, they all have the function of sending and receiving messages. For example Facebook’s Messenger and WhatsApp, they can send text and voice messages. (Lien & Cao, 2014). It has the same function as Apple’s FaceTime. It can make video calls online without additional cost. WeChat currently has a very large number of users in China. At the end of 2013, WeChat monthly active users were as high as 355 million users in 200 countries, and it supports 18 languages in different countries. The reason for a large number of users is because, with the development of the Internet and mobile phones, people are increasingly relying on apps to help their lives, and Facebook and Instagram are not allowed in mainland China, so local chat software like WeChat has appeared. (Lien & Cao, 2014). The number of users in Western countries is less than that of Facebook, by the reason it is a very troublesome thing to make friend data migration. Using WeChat is equivalent to restarting the establishment of a circle of friends. (Montage, Becker & Gan, 2018). The role of WeChat is the same as Messenger, even has a comprehensive ability that exceeds Messenger. Therefore, WeChat cannot be analyzed from a single point of view, it should be regarded as a platform for obtaining various information.

The historical development of WeChat 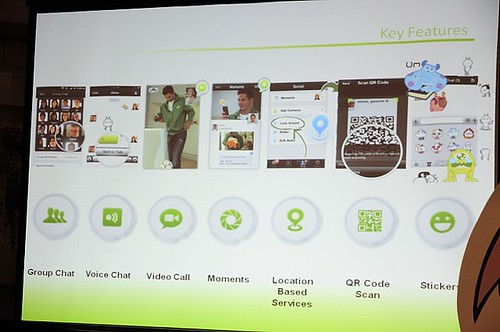 After the success of Kiki in Canada, the Tencent company create WeChat immediately. Tencent makes QQ mailbox (which is also the product of Tencent) mobile version as its predecessor, and create social apps like WeChat. WeChat’s name at first means tiny letters. Since the initial WeChat was developed by the mailbox team, the HTTP protocol was used instead of the UDP protocol commonly used by instant-messaging tools. So as before, every time we send a WeChat message, we are really sending a micro email to a friend through the WeChat backend. (Ifanr, 2018)  (Get this information through the Chinese webpage)

WeChat has gradually expanded from the Chinese market to overseas. In August 2013, WeChat began to use accounts to support Tencent Group games, and games produced by other companies were logged in with WeChat as an account. The exciting feature also appeared at this time—WeChat Pay. This is enough to change people’s lifestyle and consumption habits. In 2014, WeChat has a new service: Taxi booking service which changed people’s travel habits. In June of the same year, WeChat had a transfer function, making transfers safer and more convenient. (Steven Millward, 2018)

Due to the powerful function of WeChat, SMS is almost close to death. In 2014, people only sent 1 SMS per day on average, most of those were corporate advertising messages. In 2015, WeChat launched advertising spaces. The advertisement just like Moments sent by a friend, you can like and comment. ( Steven Millward, 2018 )  To this day, WeChat is still improving and expanding more small programs to increase market competitiveness. WeChat is now a comprehensive social platform, and social software has been reformed through novel integration such as its mini-program, QR code scanning and red envelope transfer payment. In the process of development, it has also received suppression from other companies. Weibo and Alipay are the two strong enemies of WeChat.

The owner and business model of WeChat

As defined by Lewis, the business model is simply ” how you plan to make money. ” ( Ovans, 2015 ). The owner of WeChat mentioned above, Tencent. In WeChat, a complicated business model is staged because it is a software that includes multiple services.

From the business model of individual users, it is freemium

Messages and moments are free for users to use, and the paid content is games and virtual stickers. Gaming is a big income for Tencent. Its high-quality games are the largest online gaming community in China and the digital entertainment platform with the most users in the world. Virtual stickers are indispensable for Chinese people to use in chat. It can help people express their tone and emotion in chat. ( Lianghao, 2017 ).

The business model of business partners – online to offline ( O2O )

WeChat Pay is a highlight of the WeChat company’s extension program, as well as O2O services. It allows bank cards and WeChat wallets to be bound so that mobile phones become mobile wallets. You only need to scan the QR code and enter the password to complete the transaction. This combination of online and offline models has promoted trading opportunities for retailers. WeChat can also obtain data to complete big data and make recommendations to shops to obtain commissions. ( Lianghao, 2017 ) Withdrawing cash in WeChat will also charge a small fee. 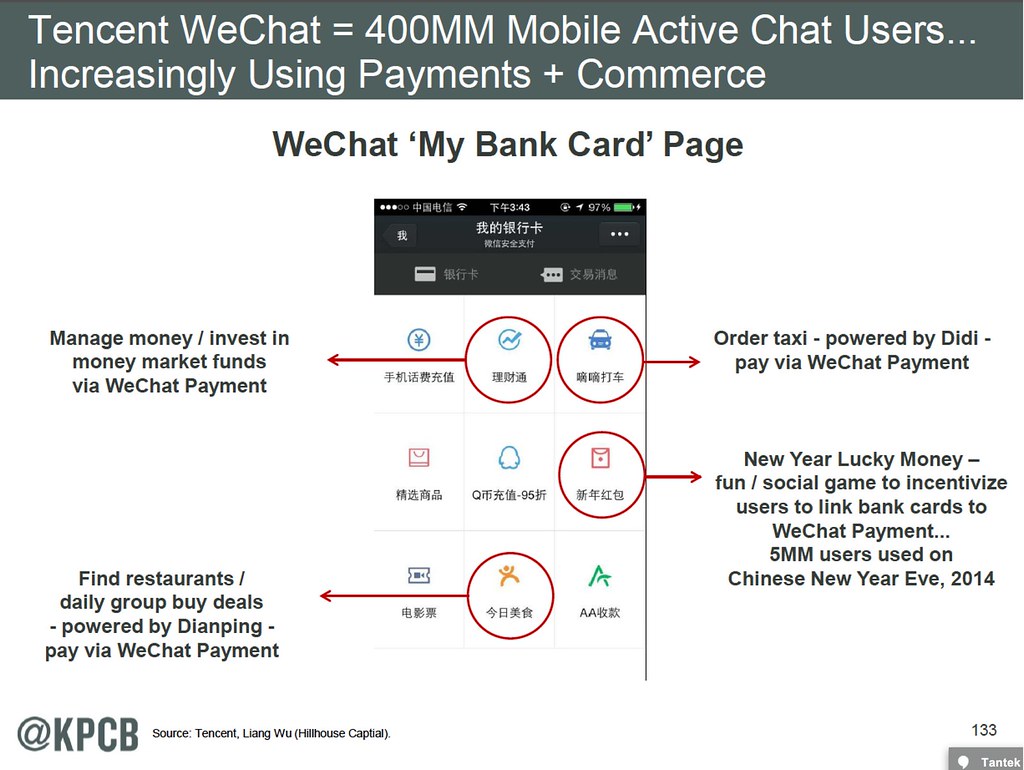 WeChat recently launched the Moments online advertising service, and the advertisements can be liked and commented just like other Moments. Mini Programs can use the services of other companies without downloading programs, such as Meituan, Nike, and McDonald’s. There are tens of thousands of lightweight apps in WeChat, making WeChat like a web page. ( Chan, 2015 ) WeChat uses small programs to increase the number of customers through cooperation with other companies, and can also obtain benefits from other companies.

How does it make changes?

In terms of politics, it’s difficult for Chinese who live in Western countries to make choice. The relationship between China and the United States is very bad this year. Trump has repeatedly prevented Chinese apps from entering the US market. Some time ago, Trump ordered WeChat to be removed from the AppStore. ” Without Apple’s product, we can use Huawei. But if there is no WeChat, how many ole people will go to use Facebook? How many of them will think to learn to use Facebook? ” Danxu Yang in August 2020. ” ThinkChina ” On behalf of netizens, they raised such doubts. WeChat has been attacked and suppressed by the United States after constantly producing new functions. WeChat for Chinese people is inseparable from the life of the App. Especially after COVID-19, the WeChat is a healthy sign as people exist – small programs there are health and safety codes. Within China, WeChat has also revolutionized politics. The Chinese government is wary of any technology that may allow free exchanges between its citizens. (Harwit, 2017). The Chinese government requires Tencent to supervise user dialogues and block them after discovering politically sensitive terms. For example, terms related to anti-communist activities or the names of well-known activists. Because of the ubiquity of WeChat, it has become an effective review and surveillance tool. From a political perspective, WeChat will also affect the direction of people’s political speech, whether it is positive or negative. ( Yang & Men, 2019 ) At the same time, the government can effectively control speech through WeChat, including emoji. In China, all sensitive topics related to politics can be eliminated by controlling WeChat. Trump banned Americans from using WeChat because of concerns that WeChat may access American chat data to obtain information. ( Kelly & Rauhala, 2020)

After people increasingly rely on social network services, people always spend a lot of time posting news on social media in order to continue interpersonal relationships. ( Zhang, Li, Wu & Li, 2016 ). Yang ( 2013 ) believes that civil society has four major aspects: the public sphere, social organization, public protests and personal autonomy. The Internet platform includes the first three points. WeChat gave birth to an online public domain and an open space. Users can interact, explain and debate social issues, and supervise the government. At the same time, it has a negative impact. WeChat can speed up information release and organize offline protests. ( Tu, 2016 ). WeChat has changed people’s lifestyles. It can be used to: improve interpersonal relationships, promote social employment, innovate public management and new social methods. (Rong, 2016). At the same time, it promotes the spread of culture, such as the red pocket in Chinese culture, which appears in WeChat in the form of electronic red envelopes, which helps Chinese culture spread to Western countries. (Rong, 2016)

The bad influence of society also exists. As the emergence of mobile networks has accelerated the development of new media and people’s lives, (Lu, 2019) (expanding people’s friends quickly) has led to people The relationship has faded. Many friends on WeChat are just moments like friends, maybe they only know their names. (Rong, 2016). In short, the social impact of WeChat outweighs its disadvantages.

With the continuous improvement and integration of the computer and telecommunications fields and the Internet revolution, digital technology has penetrated into most fields and is pushing the organization and spatial dimensions of the value chain to collapse. (Morist & Malecki, 2008). Unlike the traditional economy, users directly participate in economic activities in WeChat. (Rong, 2016). In China, WeChat has allowed people to have smartphones and WeChat software, You do not need to bring cash to go out. Supermarkets, movie tickets, restaurants, etc. can all be paid through WeChat. People also have their own QR codes for fund flow. They only need to bind their bank cards and WeChat accounts to achieve a simple life and successfully increase the engine of mobile data consumption. (Rong, 2016).

From a social perspective, WeChat has transferred people’s social interaction from offline to online to establish social circles. At the same time, new regulatory procedures have been triggered. In social software that appeared earlier than WeChat, most of them are based on manual and AI audits. This contains artificial subjective thoughts, and speech is not so free in China. WeChat is a private chat software, so WeChat is set to report bad information between users and then manually review. In terms of business model, it is also an innovation: WeChat’s business model is a mixture of messengers, Facebook and Google’s business models, and they form a complex business system model. This shows that WeChat has an absolute advantage in innovation on the social software platform, changing people’s habits in terms of life, economy, and social and cultural exchanges.

Lianghao. (2017). Business Model of WeChat and Its Success Factors. Retrieved from: https://medium.com/@lianghao.gao/business-model-of-wechat-and-its-success-factors-ce72d0f550fa

Yang, D. (2020). Apple or WeChat — which would the Chinese choose?. Retrieved from: https://www.thinkchina.sg/apple-or-wechat-which-would-chinese-choose

“dinero facebook” by clasesdeperiodismo is licensed under CC BY-SA 2.0 Facebook has become one of the most popular social media platforms today, garnering a range of users from around the world. Building on the idea […]

In China, WeChat has not only changed people’s communication habits, but brought huge social transformations.

2020-11-19 Jinwei He assignment 3 Comments Off on In China, WeChat has not only changed people’s communication habits, but brought huge social transformations.

Let’s chat——WeChat   WeChat is an instant messaging platform with the largest number of Chinese users in the world. In modern China, WeChat has replaced traditional messages and phone calls and become the most commonly […]

Has The Rise Of The WeChat Era Changed Society?

2020-11-19 Ang Li assignment 3 Comments Off on Has The Rise Of The WeChat Era Changed Society?

Introduction With the advancement of science and technology, WeChat has changed from a primitive social communication tool to a lifestyle that promotes digital sharing and consumption on a global scale. The widespread application of the […]