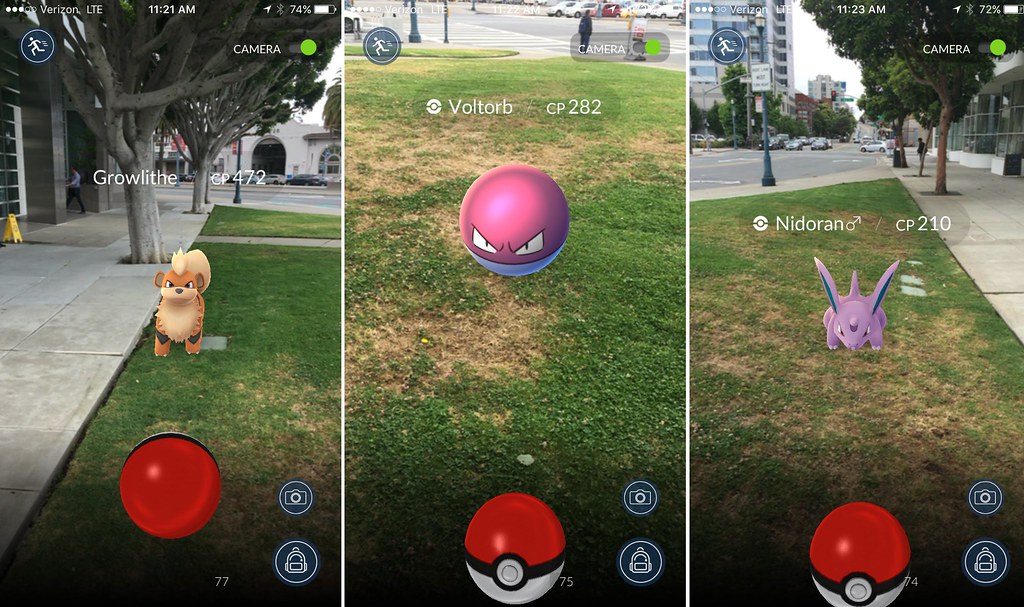 “pokemon go how to download and play pokemon go, in india and all over the world, free (4)” by Bolly Holly Baba is licensed under CC BY 2.0

In July 2016 Niantic released a game called Pokemon Go. Pokemon Go is a location-based mobile games. It is using GPS on players smart phone to recognize where the users are and at the same time augmented reality (AR) technology is used in this game. In 2020 this game remains as the one the top games in Google play store and many people enjoy playing this game. In this essay I will discuss what AR is, give short brief history about the game company Niantic and changes lead by Pokemon Go.

What is Augmented Reality and its example

Augmented reality is different to Virtual reality (VR). VR is based on information that are generated by computers. Everything that people see, touch, hear and interact in VR setting is made by computer to give realistic experience to users. However, AR is using computer generated information, like visual information made by computer and placing it on top of real world to enhance the engagement with the world (Furht, 2006, Jones, 2020).

Here is an example of how AR is used created by Magic Software Inc.

As it can be seen in the video AR technology uses computer generated visual materials on top of real world to help or enhance engagement with the world around us.

Niantic is a game developer and technology company that focuses on using augmented reality. In2001 it originally started with small group of computer scientist, AI researcher and cartographers called their team Keyhole. They were interested in making 3D maps of the planet. In 2004 google acquired Keyhole and renamed it as Google Earth. They continued to building 3D maps of cities and countries lead to development of Google Street View, Sketch Up, Google Maps and Panoramio. In 2010 Niantic Lab started as a startup within Google. The aim of Niantic was to develop a game that can explore and discover new places, exercise and social interaction among people in real world using AR.

In 2012 Niantic released a game called Field Trip using GPS that lead to cool, hidden and unique places around the players and later developed game Ingress which is the first location-based game using AR technology utilizing features of real world into games.

As it can be seen from figure 1 Niantic has number of investors and in 2019 Niantic secured 245 million dollars of funding from IVP, aXiomatic Gaming, Battery Ventures, Causeway Media Partners, CRV, and Samsung Ventures (Adams, 2019). Also, there are number of different software and game companies competing with Niantic. There are 3 other location-based and AR games that is competing with Pokemon Go.

What is Pokemon Go

Pokemon Go is a game that players use their cameras on smart phones to see and catch creatures called Pokemon that can be found around us. With that pokemon players can battle with other players or can participate in a battle league. Players can also gain items by visiting poke stops it is based on real world places around users like certain landmark of city or famous buildings. In South Korea Niantic made a contract with convenience store 7-eleven in to be a poke stop over 7000 stores became poke stops and 800 stores became poke gyms for battle (Sohn, 2017). Watch this short video to see how Pokemon Go is played created by Pokemon Go.

Pokemon Go can lead the new trend of marketing on games as Poke stops and gyms can attract Pokemon Go players to visit. Also, certain Pokemon only appear at specific places and some unique, rare Pokemons can only be found in certain places therefore, many fans of Pokemon Go will go and catch the Pokemon they want (Mago, 2017).

As it was mentioned above, since the emergence of Pokemon Go many retail stores used Pokemon Go as a new strategy for marketing. Some electronic cigarette retailers asked users to take a photo of their product with a Pokemon to win a new set of electronic cigarette device. Other companies advertised that their stores were poke stops to attract game players and also, cigarette companies carried out a competition among their customers to show them a rare Pokemon to get a discount (Kirkpatrick et al., 2017).

As Pokemon Go is location-based AR game players of this game have to physically move and go out to gain items from Poke stops or to do a pokemon battle at the poke gyms and capture pokemon that they want. As it is showed in Wu and Stilwell (2017), Pokemon Go have high potential in marketing.

According to Kamboj and Krishna (2017) there are potential health benefits from playing Pokemon Go. Pokemon eggs can be acquired at the poke stops and in order to hatch the egg player have to move certain distance. The amount can be 2 to 10 kilometers. Also, the primary aim of this game is to capture pokemon and training them to be strong so that they can win at the battle. To capture pokemon and gain items to train their pokemon players have to walk around to encounter pokemon and poke stops. Centres for Disease Control and Prevention (CDC) say that at least 150 minutes of fast pace walking is enough for a weekly exercise. Therefore, players can benefit some from playing Pokemon Go.

Due to development of technology people can play every were using their smart phones. The idea of playful space started from the 19th and early 20th centuries. The Flaneur refers as the wanders in streets or urban explorers. The wanderers were seeking enjoyment by exploring the city (de Souza e Silva and Hjorth, 2009). Pokemon Go is form of urban play people are exploring city and players can seek enjoyment by wandering around the city.

Side effects of AR games

New and advanced technologies cannot be always good it has both positive and negative effects on our world. In Pokemorbid in Tumblr there are collection of photos, news article and social network posts that show inappropriate places or situations where pokemons are. Pokemons can be found in inappropriate public place such as war memorials around the world, 9/11 memorial in New York and holocaust museum in Florida. The museum is asking people to stop play Pokemon Go in the muse mum.

Some private houses were incorrectly tagged and to protect people live near Pokemon gyms and stops Niantic decided to give warning signs to players where more than 10 people gather at one poke stop or gym (Robertson, 2019). Niantic cannot physically visit all poke stops and gyms to see whether it is safe or appropriate place to be or not. Even the grave yard of famous signer Elvis Presley is a poke stop and pokemons can be captured there.

In some cases, players of get injured and some drivers were playing Pokemon Go while they were on the car. So, in Jakarta, their government decided to ban Pokemon Go on certain roads (Prasetyo, 2016). In case of people in private land getting affected by Pokemon Go players there is no specific laws to protect them (Judge and Brown, 2018).

There is also a concern about the data privacy. In the article written in 2016 show that while millions of players were out there catching pokemon the company was looking through personal data of the game players. According to Niantic privacy policy, Niantic collects users email address, Google account details and GPS information. However, if Niantic collects users Google accounts details Niantic can access personal information that are on Google email, docs and Drive.

Finally, Pokemon Go is free, players do not need to pay to buy this game however, there is items that players can buy using real currency so called in game purchase. There are possible risks for young children buying a lot of in game items mistakenly or intentionally. Also, there is possible physical harm due to not paying attention to real world obstacles and environment around the users. There is a case where robbers take advantage of these careless people not watching around them (Serino et al., 2016).

In conclusion, augmented reality technology brought many positive changes to our society. It has introduced us with new trend of marketing strategy and possible benefits of playing location-based AR games on health and education. Despite the positive effects of AR games there are negative sides of it people can be physically and economically harmed and there is also, a urgent need to make appropriate law to protect those who suffer from unwanted visits by the Pokemon Go players.

Rovertson, A. (2019). Niantic is tweaking Pokémon Go to settle a lawsuit with angry homeowners. The Verge. Retrieved from https://www.theverge.com/2019/2/15/18226604/niantic-pokemon-go-lawsuit-changes-settlement-private-property-pokestop-gym

About Sang Lee 2 Articles
Hi, I am 3rd year student studying psychology and Asian studies at The University of Sydney. I like traveling and taking photos. I have a tangerine leopard gecko as a pet.
Twitter

In short, Augmented Reality is an internet innovation that both benefits and disadvantages social and cultural groups. Augmented Reality (AR) refers to a digital projection over the real world, which crafts a technological illusion that […]

“LG OPTIMUS 3D ADDS ANOTHER INNOVATIVE FIRST WITH 3D AUGMENTED REALITY” by LGEPR is licensed under CC BY 2.0 Virtual Reality vs. Augmented Reality vs. Mixed Reality Augmented reality (AR) is the use of devices […]

On July 6, 2016, The Pokémon Company and Niantic released their joint augmented reality project, Pokémon Go, across Australia and New Zealand, with a US release following the next day. It was an instant hit, […]