What is meant by the “techlash”?

Since the advent of digital technology, it is believed that information technology has made our lives easier, for example, the advent of the Internet has allowed for the emergence of new forms of social connections that allow people to communicate and express themselves more. For most people, it is a valuable tool to make our lives and society better. But in recent years, the view has changed, and the growing power of large technology companies is the main culprit for a great deal of economic and social harm. This phenomenon is known as “techlash” and refers to a widespread hostility and fear of large technology companies (Atkinson et al., 2019)

What are public concerns that lie behind the techlash?

With the emergence of tech giants, there is a growing concern that large tech companies such as Google, Facebook, and Amazon may be hurting people. Globally, trust in the technology industry has declined from 77% in 2012 to 68% in 2021 (West, 2021). This article divides the concerns into two parts: economic and social.

In economic terms, monopoly markets are one of the most common complaints about large technology companies cited by “techlach”. Large technology companies use their strong market position to make their own rules and hinder the development of their competitors. For example, Google enjoys a monopoly in search and search advertising, and its dominance is protected by its own data and transactions. Google has made agreements around the world to be the default search engine for many browsers and devices (Bond et al., 2020).

User privacy and security is now a top priority for the Internet industry worldwide. Most technology companies are aware that their use of and reliance on data will grow stronger, and therefore collect large amounts of user information for their own use. While most consumers are fully aware that they are providing data, for example, by using a website or application with an affirmation or request that includes the processing of privacy; the potential for data collection still exists. For example, the Seattle Times reported that Amazon’s smart home device Alexa recorded the audio of millions of children without parental consent (Romano, 2019). When a user activates an Alexa device using a wake word, audio is recorded, and Amazon employees listen to these recordings and will mark some child recordings for training purposes.

Many fear that the Internet is becoming a platform for hate speech to proliferate online. While the internet has created opportunities to give marginalized groups a voice and make our daily lives easier, it has also given a voice to those who spread hate (Berners-Lee, 2019), and social media and other web applications have the potential to recruit followers more easily. Not only that, but some platforms with larger user bases allow for the promotion of racist, extremist, and other content. In a speech at the Anti-Defamation League, actor Sacha Baron Cohen attacked Facebook and other social media platforms for contributing to the spread of hate speech and misinformation. He described Facebook as “the greatest propaganda machine in history,” arguing that the company does not censor the veracity of political ads and allows Hitler-related content to be promoted on its platform (Read Sacha Baron Cohen’s Scathing Attack on Facebook in Full: “Greatest Propaganda Machine in History,” 2019).

To what extent can these concerns be addressed by governments, by civil society organizations, and by the technology companies themselves?

As a result, the actions of large technology companies such as Facebook, Google, and Amazon have led to the emergence of troubling economic and social issues, and are being closely watched.

To address these risks, governments and civil society organizations have been advocating for greater regulation and intervention; technology companies have also taken self-regulation measures.

The government cannot sit idly by while large technology companies monopolize the market, violate privacy, and promote hate speech, so it has introduced many laws and regulations. For example, in 2020, the Department of Justice sued monopolist Google for violating antitrust laws, and the government passed the Sherman Antitrust Act to protect the free market economy and prohibit monopolists from engaging in anti-competitive behavior(Justice Department Sues Monopolist Google For Violating Antitrust Laws, 2020).

With regard to data, the European Union has introduced the General Data Protection Regulation; Australia enacted the Privacy Act in 1988 and reviewed and improved the Privacy Act in late 2020. For example, many countries in China and the Middle East have imposed “strict liability”(Gillespie, 2017,p.258 cited in MacKinnon et al., 2014,p.40), requiring Internet intermediaries to block the circulation of illegal or illicit content, which often means proactive removal or censorship, often in direct cooperation with the government.

Gillespie (2017) argues that the rules imposed by the platforms themselves may be more important than the legal restrictions under which they operate. Although platforms like Facebook, Twitter, and others have always positioned themselves as “open, impartial, and non-interventionist” (Gillespie, 2017, p. 256); as hate speech, pornographic images, and other disturbing content continues to emerge, these technology companies have developed automatic identification tools to remove and ban content such as hate speech, pornographic images, etc. For example, Facebook has been very effective in automatically flagging and removing terrorist content. Self-regulation of technology companies goes some way to ensuring that the pursuit of short-term profits does not come at the expense of human rights, democracy, scientific facts, or public safety (Berners-Lee,2019). 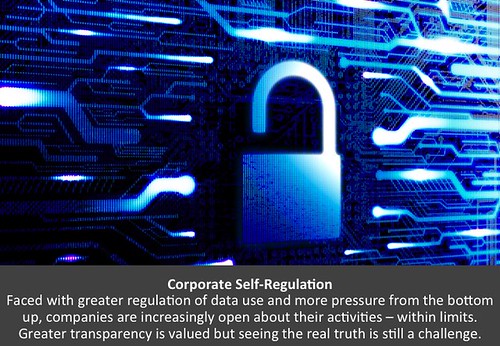 “Corporate Self-Regulation” by future.agenda is licensed under CC BY-NC-SA 2.0

In recent years, the algorithmic dissemination of hate speech, disinformation, and conspiracy theories by Internet platforms has seriously affected the lives of citizens. With the emergence of tech giants, there are increasing calls for regulation of Facebook, YouTube, etc. #StopHateForProfit, a campaign organized by civil rights organizations NAACP, ADL, Color of Change, FreePress, and Common Sense Media, demands that Facebook must stop prioritizing profits over hate, bigotry, racism, anti-Semitism, and disinformation (Mcnamee, 2020).

Not only that but also in response to Amazon’s collection of children’s privacy, children’s advocates are asking the Federal Trade Commission to investigate the Echo Dot Kids Edition. These citizen-initiated campaigns or requests were met with appropriate responses. It is thus clear that the involvement of civil society organizations in the line hunt to regulate technology companies can promote support for regulation; it can also enhance citizens’ awareness of participation and social responsibility, and strengthen their awareness of rights protection. However, the supervision by civil society organizations needs to be done in cooperation with the government or tech companies, and specifically through laws or rules of industry organizations to implement effective regulation.

To summarize, “techlash” refers to dissatisfaction or concern about large technology companies (aka “Big Tech”). As the techlash has gained momentum, more and more problems have emerged, and one party alone cannot address the risks; therefore, as Tim Berners-Lee (2019) advocates, governments, tech companies, and civil society organizations need to work together and collaborate to implement regulations and solve problems.

The Australian High Court ruled last month that media publishers on Facebook are now liable for any defamatory comments on their posts by third-party users. This places the greater responsibility on the publisher of the […]

US President Donald Trump get banned indefinitely from Facebook!

2021-08-19 The Hung arin2610, Group 10 Comments Off on US President Donald Trump get banned indefinitely from Facebook!