Science-fiction provides us with entertainment and more importantly commentary on the future. The Matrix, Minority Report, 1984, Brave New World, provides insight into a dystopian window of the future, yet it’s fiction just our imagination. Citizenfour on the other handsets out a terrifying reality of mass surveillance, control, and power. The real-life thriller documentary explores the explosive revelation that the US government was mass spying on their citizens brought forth by whistle-blower Edward Snowden. 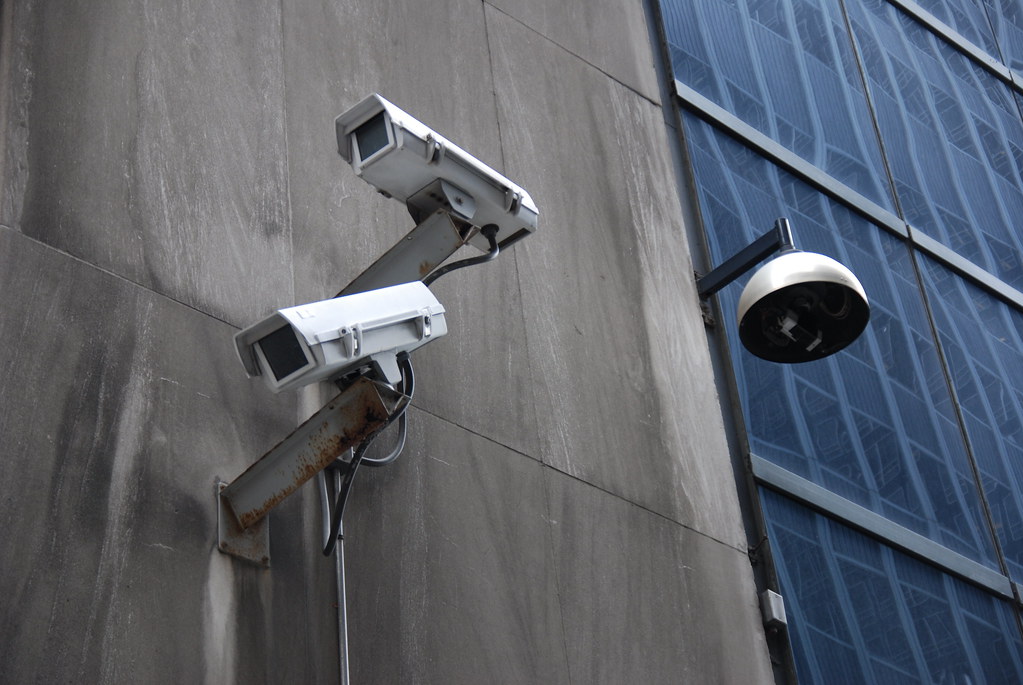 “Surveillance” by jonathan mcintosh is licensed under CC BY-SA 2.0

“Why should people care about surveillance?” “Because even if you’re not doing anything wrong, you’re being watched and recorded” – Edward Snowden

Since the 2013 news of the United States (US) government’s mass surveillance brought shockwaves to the world with its ramifications still felt to this day. Citizenfour could be seen as a starting point for the internet’s change from an optimist avenue to a slow descent into pessimism. The late 2010s saw a tonal swift as more division and fear of governments control. One of the major reasons for mass surveillance has been to stop terrorist attacks. After 9/11 major sweeping laws were enacted with the Patriot Act by President George W (Sottek & Kopfstein, 2013). The US government justifies these measures for mass surveillance to help fight the “War on Terror” (Penney, 2016). Edward Snowden former National Security Agency (NSA) contractor downloaded files of sensitive documents outlining the process of NSA’s mass-surveillance program (Greenwald et al., 2013). The major leak exposed the NSA’s PRISM program that enabled data collecting and storage of every US resident (Sottek & Kopfstein, 2013). The mass data is called meta-data which refers to “data about other data” essentially linking users’ search, queries, messages (Hersh, 2021). The NSA’s main focus is on gathering intelligence wherever it can by any means possible on the grounds it serves the national interest (Citizenfour, 2014). Furthermore, the use of terrorism for example as a blanket for mass surveillance undermines citizens as it allows for the oppression of free speech and the loss of privacy leading to the loss of liberty (Citizenfour, 2014). The danger comes from the amount of personal data being collected. For example, an individual may eventually fall under suspicion for wrongdoing innocent as they may be, the NSA can search and scrutinise every choice the individual has made because of the collected data (Citizenfour, 2014). This has chilling consequences as the abuse of power could easily be executed.

“When you are subverting the power of government that’s a fundamentally dangerous thing to democracy”. – Edward Snowden

The damaging problem with mass surveillance is the control it imposes. The most terrifying aspect wasn’t only the collecting by the US government, but by most nations. After the publication of the Snowden documents exposing these programs it also brought up other nations’ similar programs. One of them being the United Kingdom’s (UK) Tempora system used by the British Government of Communications Headquarters (GCHQ) part of the leak (Citizenfour, 2014). It enabled access to large amounts of internet users’ data through fiber optic cables (Citizenfour, 2014). Recently Europe’s top court ruled that UK’s mass surveillance system violated human rights the case was brought by Amnesty International and other rights organisations (“UK: Europe’s top court rules UK mass surveillance regime violated human rights”, 2021). A much-needed win for sure, yet one ruling isn’t enough as other nations have have continued to pass and enforce surveillance laws. Recently, Australia amidst the Covid-19 pandemic quietly passed the Surveillance Legislation Amendment (Identify and Disrupt) Bill. The bill provides increased powers to law enforcement such as data disruption allowing for the copying, deleting, or modifying data as they see fit, network activity a permit collection of data, and account takeover allowing agencies to take control over, online accounts for investigation (Kang & Abu-Khalaf, 2021). This sounds like it should be part of a dystopian story, not real life, the bill practically legalises hacking and can be easily abused, it’s these policies that eroded freedom. Additionally, China continues to tighten its grip through surveillance seen during Hong Kong protects against the draconian security law introduced in 2019 (Davidson, 2021). The current state of surveillance hasn’t changed, it’s gotten worse.

“When we lose privacy, we lose agency, we lose liberty itself because we no longer feel free to express what we think”. – Jacob Applebaum

Whilst this wasn’t a major sticking point in the film, the NSA’s PRISM did show the involvement of major tech companies providing over personal data (Penney, 2016). This does plant the seed of doubt on both parties since the leak there have been countless stories of “commercial surveillance” (Zuboff, 2015). Furthermore, it blurs the lines between both government and private surveillance activates as both are complicit (Zuboff, 2015). When the news broke about NSA’s PRISM that outlined the tech companies contributing their collected data, all denying such process was happening (Welch, 2013). Since then, tech companies continued to harvest personal data with alarming consequences such as Facebook’s Cambridge Analytic scandal to Apple’s Child Sexual Abuse Material (CSAM), and countless data leaks. Both Facebook and Google have become notorious for data collecting and surveillance. Due to their business model of advertising, specifically targeted adverts the means of collecting personal data are prevalent (Acquisti et al., 2016). This has dire problems as it violates users’ privacy, in facebook’s case election manipulation, uncompetitive business practices by Google, and more (Schiffer, 2019). Recently, Apple introduced a privacy feature that enabled users to opt-out of tracking by apps affecting their targeted advertisements (Fowler, 2021). This was praised by many and hated by tech companies mainly Facebook. Furthermore, in 2016 Apple didn’t back down the FBI’s demands for a backdoor of their encrypted iCloud data, but the FBI did eventually breakthrough (Benner & Lichtblau, 2016). This begs the question of whether governments can be trusted with backdoors if such a system isn’t needed. However, Apple’s CSAM goes completely against this moral stance they’ve created. CSAM enables the scanning for explicit illegal photos of Apple users, currently, the rollout has been delayed (Peters, 2021). But it’s worrying to know that such a tool exists. Though tech companies weren’t the main focus of the film it does provide another perceptive of internet privacy. It goes to show that governments aren’t the only problem, but so are tech companies who are just as complicit.

“if we don’t have a right to privacy, how do we have a free and open discussion?” – Ladar Levison

One particular area the film explores is the loss of freedom that mass surveillance entails. In the Film, Ladar Levison founder of Lavabit a secure email service mentions how the US government forced Lavabit to hand over Snowden’s email log details, denying their request was forced to shut down (Citizenfour, 2014). It’s safe to assume that the public’s awareness of surveillance has brought more attention to internet privacy and spying. With increased stories over the years of both governments and corporations spying on their citizens and users, there is no escaping it. Yet, the lack of transparency and knowledge on surveillance and internet privacy still prevails in the majority of the public (Dencik and Cable, 2017). As those who advocate for the stopping of such programs are in the minority (Stoycheff, 2016). Despite the knowledge of such issues, not much has changed to protect the private and digital rights of people. While the European Union has introduced the General Data Protection Regulation (GDPR) establishing measures to uphold internet privacy and data protection, but its effectiveness remains to be seen. The fear with surveillance is it becoming normalised, as those vocal minorities may have limited sway (Stoycheff, 2016). This can already be seen with our linking of data such as credit cards to sites to metro cards. This normalising and acceptance of convenience will erode any means of privacy and add to surveillance (Citizenfour, 2014).

“The greatest fear that I have regarding the outcome for America of these disclosures is that nothing will change”. – Edward Snowden

Citizenfour is one of the most important documentaries to be released in the 21st century. The issues of surveillance, internet rights, privacy, and truth are ever more significant as we head towards an increasingly integrated life with the internet. What Edward Snowden released to the public will have significant benefits to everyone, yet it’s up to the public to combat these laws.

Fowler, G. (2021). Facebook now has to ask permission to track your iPhone. Here’s how to stop it.. The Washington Post. Retrieved 15 October 2021, from https://www.washingtonpost.com/technology/2021/04/26/iphone-ask-app-not-to-track-ios-update/

Kang, J., & Abu-Khalaf, J. (2021). Facebook or Twitter posts can now be quietly modified by the government under new surveillance laws. The Conversation. Retrieved 15 October 2021, from https://theconversation.com/facebook-or-twitter-posts-can-now-be-quietly-modified-by-the-government-under-new-surveillance-laws-167263.

Schiffer, Z. (2019). Facebook and Google surveillance is an ‘assault on privacy,’ says Amnesty International. The Verge. Retrieved 15 October 2021, from https://www.theverge.com/2019/11/20/20974832/facebook-google-surveillance-data-assault-privacy-amnesty-international.