The dystopian television show, ‘Black Mirror’, by Charlie Brooker represents an austere vision of the future where society has diminished into a despotic, technocratic state. Although it is both bleak and pessimistic, serving to warn us about the trajectory of technology ‘run wild’ (Ward, 2021), the show rated 84% on Rotten Tomatoes maintains our interest through its close social critique of our society. While futuristic in nature where fantastical technology is represented, the society represented is nearly analogous to ours; Black Mirrors technology is peripheral to our currently existing technology while the set locations are familiar to us (Ward, 2021). In presenting a familiar society that is relatable to viewers, Brooker better represents the negative effects of ominous technological developments which enable the ‘monstrosity of human nature’ (Ward, 2021). 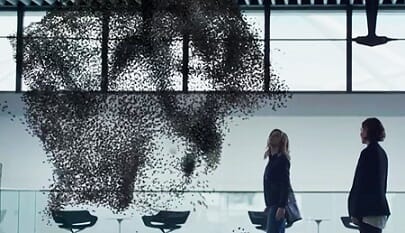 Hated in the nation:

What is the power of words? Season 3 episode 6, ‘Hated in the Nation’ is a social critique that forces us to realise how surveillance is easily problematised and to see the real consequences behind hate speech, presented through the coupled weaponization of online outrage and facial recognition. This episode highlights the double-edged sword of technology as the technological advancement of Autonomous Drone Insects (ADI), used to address the collapse of bee colonies and the subsequent lack of pollination are given the hidden purpose of mass surveillance through facial recognition technology. Disillusioned with social media, villain Garret Scholes, hacks the ADI’s to show his society the individualised consequence of online hate, seen through his creation of ‘#Deathto’ (Kwon, 2021). The hashtag along with a photo is directed to the ‘most hated person of the day’ and whoever receives the most posts is subsequently killed by the AID’s who implant themselves into the victim’s brain. Likened to the current phenomenon of ‘cancel culture’, Brooker uses the physical metaphor of ‘swarming bees’ to illustrate the impact of ‘mob’ or ‘hive’ mentality’ thus critiquing the rapid circulation of unreflective emotional responses online (Kwon, 2021). Further, the ease of #Deathto popularisation represents the contemporaneous banality of individuals motivated to wish death on complete strangers, fuelling the internet’s commonplace toxicity (Ward, 2021).

When does surveillance go too far?

Brooker aims to show truism of surveillance, that no matter how well intentions it may be, there is always the potential for the technology to problematise and remit a devastating effect (Ward, 2021). ‘Hated in the Nation’ envisions surveillances trajectory as turning our future society into a despotic surveillance state where we are controlled by the data that they collect about us (Kwon, 2021). Not only is this a central ethical concern but our society is quite parallel to the one represented, evident within platform surveillance. Brooker thus represents a prophetic image that warns us of our vulnerability to surveillance technology in misuse and the arrogance of institutions that trust their own systems (Kwon, 2021). The high error rates of technology are mirrored in our own societies, seen through the creation of ‘COMPAS’ an AI used by law enforcement to estimate people’s likelihood of recidivism (Kwon, 2021). It became apparent after continued use that was discriminatory against black defendants and women. We are further warned about the illusion of technological neutrality, highlighting that we need increased transparency and accountability measures for technology (Kwon, 2021).

Through this episode Brooker further uncovers the theme of technological determinism, a notion where we see the effects of the limitless innovation of technology that is free of guidance and control (Sarlos, 2021). With the absence of regulation, communities renounce their right to have control over their own development and thus loose power (Sarlos, 2021). When technology evolves without transparency, society is not informed that AIDs are a surveillance mechanism and do not understand their capabilities, technocracies and the government are able to maintain power. The lack of interest surrounding the bee’s capabilities other than pollination highlights how the need to ‘ask about technology is presumably dying out’ as it regulates our totality and position in the world (Heidegger from Durarte, 2021).

With the increasing amount of hateful content on platforms, I begin to wonder how much longer will freedom be the internet’s organising principle? The internet’s creation was fuelled by the ‘Californian ideology’ (1996), that was embroiled with ‘free minds and free markets’ and underpinned by the primacy of free speech (Karpf, 2018). The Perils of the ‘hands off’ approach became painfully apparent, as a lack of platform regulation allows for the propagating of outrage that includes hate speech, threats of violence which are not censored, predominately for their own interest (Gillespie, 2017). Hate speech has detrimental effects on individuals seen not only through #Deathto but recently through Australian Prime Minister Scott Morrison’s address where he likened social media to a ‘cowards palace’ that “destroy(s) people’s lives and say the most offensive foul things.” (ABC, 2021). The lack of platform regulation for business’s own benefit has recently been exposed by whistle-blower Frances Haugen, prior Facebook (FB) employee, who contended that FB rather amplifies ‘hate, misinformation and political unrest’ (Pelley, 2021). Although FB has the best technology for censoring hate, yet it is estimated that ‘3-5% of hate’ is censored, as content fuelled by emotion is ‘enticing’ thus keeping people on the platform (Pelley, 2021). Instead of changing the algorithm to be safer the platform rather optimizes their own interest, using hateful content to keep users engaged for longer so that FB can heighten revenue through data collection and advertisements.

On the bifold, a study in 2018 found that ‘social media companies should continue to censor and remove hateful content’, as actions such as de-platforming Terrorist groups were effective in reducing user engagement and content publication (Romano, 2021 link). The most frequent argument against de-platforming is that they are ‘akin to censorship’ (Romano, 2021 link), however when extrapolated social platforms are considered private businesses rather than public spaces, laced with terms of conditions and user requirements that contend against hosting particular speech (Romano, 2021). Under the Section 230 ‘safe harbour’ rule that protects websites/platforms from being legally responsible for what users say or do while using them while the removal of user content is not considered ‘censoring constitutionally protected speech’ (Romano, 2021). As seen in the society present in ‘Hated in the Nation’ it becomes apparent that online communities ‘need care’ (Gillespie, 2017) to foster a healthy space that users want to revisit and use for their own benefit.

‘Black Mirror’ thus provides us with an interesting show that delves into a dystopic vision of our future, where Broker presents technologies pessimistic trajectory. In uncovering the themes of the conflictual nature of content regulation, the effects of hate speech and the issues with privacy, particularly surveillance, the episode awakens us to the perils of technologies ubiquity showing us what could happen if we let technology run wild.

About Lauren Minihane 1 Article
Hi! My name is Lauren and I am a digital cultures student at USYD. My hobbies include the beach, photography and painting. At the moment I would love to be an active journalist or work for the UN. I also love watching youtube and being a content creator would be a dream of mine. :)
Instagram

Are Internet and Social Digital Network As Enhancement or Reduction Tool Towards Gender Inequality?

2021-10-15 Karen Wong Assignment 2, Group 5 Comments Off on Are Internet and Social Digital Network As Enhancement or Reduction Tool Towards Gender Inequality?

With the vigorous development of technology, the internet was flourishing rapidly since the mid-1990s. Internet is ubiquitous and almost every individual owns at least one digital device as a communication tool and connection to the […]

Public concerns caused by ‘Techlash’ and how to solve these problems

2021-10-14 Hao Huo Assignment 2, Group 7 Comments Off on Public concerns caused by ‘Techlash’ and how to solve these problems

Introduction “ What is Techlash” Technological backlash refers to the strong and widespread negative reaction of society and the public to the growing power and influence of large technology companies. Since the financial crisis in […]