Silicon Valley from above

Home to Netflix, Facebook, Google and more, Silicon Valley has become synonymous with innovation, creativity, and collaboration which are often called “Tech Culture” due to the impact that these tech companies have around the world (2019). For instance, one of the ways that collaboration culture improved in Silicon Valley is that According to Forbes, the collaboration culture became successful due to a new regulation that was formed by Google co-founder, Sergey Brin. This rule states that employees should not be further than 200 feet from food so that staff are encouraged to interact with each other because Brin believes that casual conversation often sparks ideas or solutions (Burkus, 2016). Moreover, before the “Tech Culture” in Silicon Valley, they were home to military and fantasy (Gebel). However, after companies like Apple and Intel were formed, other tech companies emerged which created a ‘tech boom’. Thus, tech companies changed and shaped Silicon Valley culture today due to their success and reputation globally which is why Silicon Valley is known for the world’s preeminent hub of technology.

Gebel, M. (n.d.). What Silicon Valley looked like during the early days of the tech boom. Business Insider. Retrieved September 15, 2022, from https://www.businessinsider.com/silicon-valley-during-early-days-of-tech-boom-photos-2019-5

“income inequality within (and among the) feet of Wall Street” by incendiarymind is licensed under CC BY-NC 2.0.

Silicon Valley functions under an hourglass economy model, where the middle class is shrinking rapidly while the lower and upper classes grow at a rapid pace. An intensely fast-paced work culture is illustrated by the constant replacements of startups and large ups and downs in the economy. This has created an even greater gap between the rich and the poor, with income inequality being exacerbated by the rise of housing costs. Middle-class jobs have slowly started to disappear due to high costs of living and the growing need for specialization.

Businesses favor software development firms and sources of venture capital, meaning that entry into Silicon Valley is barred by high skill levels and intense specialization. There has been a decline in mid-wage jobs by 3% over the past decade, while low-wage jobs have grown by nearly 25% in the past two decades. This has resulted in a culture of economic polarization, urging the public to bring back the middle class. While Silicon Valley is revered as a metropolis of innovation and never-ending capital, the reality is that there are severe socio-economic consequences to the fast turnover rate. 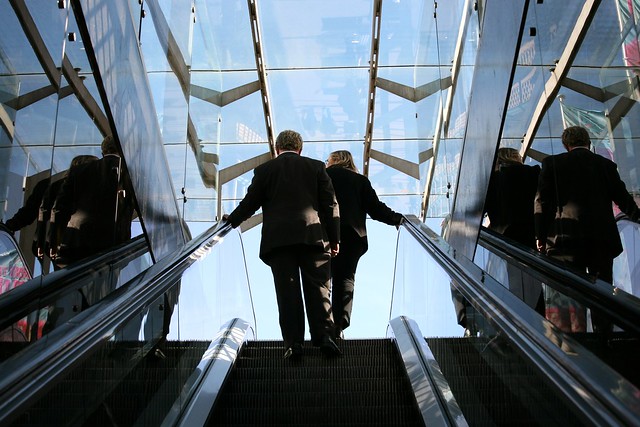 “Office Politics: A Rise to the Top” by Alex E. Proimos is licensed under CC BY-NC 2.0.

“Technologists could help push lawmakers, especially Democrats, further to the left on many social and economic issues” (Majoo, 2017)

New York Mayor Bill de Blasio had a battle with Uber while Zuckerberg and Bill gates spent millions on funding the public charter school movement. A total of $241M has been spent on lobbying and creating new policies by tech companies. Studies have shown that most tech entrepreneurs are increasingly leftist democrats and that its very rare to find republicans in the sector.