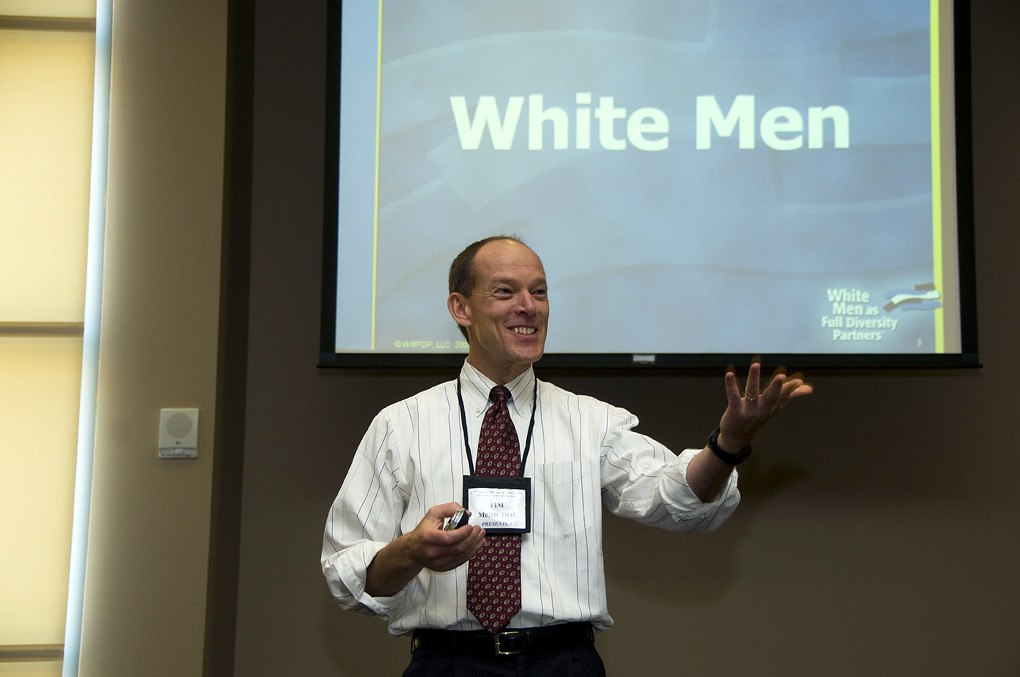 “White males and diversity” by OregonDOT is licensed under CC BY 2.0.

The initial motivation behind the creation of the Internet was to develop a decentralised environment where information could become more accessible to its users. The first advancement of this ideology was developed by college-educated males, which is visible in the instance of seeing the development of Transmission Control Protocol/Internet Protocol (TCP/IP) as a joint collaboration between UCLA, MIT, Stanford, and other U.S. universities (Leiner, 1997). Further, the creation of the World Wide Web in 1989 was led by Tim Berners-Lee and other male associates at the Swiss Research Institute, CERN.

Historically, the narrative of the Internet has been controlled by a non inclusive, elite class of individuals; currently these ideals are still instilled by the insular values of “The Big Four” technological companies: Apple, Amazon, Google, and Meta (formerly known as Facebook). The employees of these respective corporations influence the specific kinds of content and algorithms that arouses consumer attention. In the age of the digital revolution, the majority of technological companies employ straight, Caucasians males to maintain higher positions of power than other minority counterparts. Since the non inclusive conditions in which the Internet was formed no longer represent the multicultural population of the medium’s consumers, the public calls for progressive change for more inclusive hiring practices.

These figures from Google’s 2021 Diversity Annual Report reflect the need for further diversity of Big Four technological employees in order to prevent subconscious biases that inform platform algorithms. Algorithmic bias will continue to pervade the Internet and create misunderstandings of regional dialect that can be resolved with employees who understand such dialectical complexity. An instance of this can be seen in algorithmic flagging of Tweets written in African American Vernacular English (AAVE) to be “inflammatory”, despite the message being non-offensive (Sap, 2019).While this is a complex vernacular problem, more awareness of this issue should be garnered in order to improve algorithms and expand upon the limited and stilted vocabulary of ethnocentrically Western employees.

Intrusion of the Internet onto the Political Sphere

As the scope of the Big Four’s influence becomes more pervasive, the lack of platform competition that these companies encounter fashions them into a unique position to manipulate democratic processes for corporate gain. While the workplace culture is known to have a “nauseatingly liberal,” monoculture, the values of executives inevitably hold more authority than corporate social responsibility. Internet users have long been calling for further government regulation to prevent political manoeuvring, and this ideal was further cemented when Zuckerberg faced a deposition over the Cambridge Analytica scandal in 2018. In this instance, Facebook bestowed personally identifiable information of more than 87 million users to Cambridge Analytica for the purpose of “micro-targeting” individual consumers or voters with messages, most likely to influence their behaviour (Isaak & Hanna 2018). The scandal was the final provocation of public scepticism surrounding data privacy, newsfeed integrity on the platform, and the subconscious impacts of social media on individual behaviour.

The congressional hearing of Zuckerberg only further proves the disconnect between Internet systems and its users. The information that government agents analyse from big tech figures is difficult to draft regulation around since lawmakers themselves are consumers, unable to fully grasp the nuances of this technology. The lack of intelligibility and transparency from The Big Four hinder discussion of technological regulations as well. “The digital platforms have come – partly by accident and partly by design – to shape public conversations that can both facilitate and destroy trust among citizens in public institutions, the political process and, ultimately, trust in one another. The struggle to renew public trust will be at the core of any new measures to address the agenda-setting influence of these digital giants.” (Flew, 2019).  Significant social pressure, such as lobbying and boycotting, can also be adopted until technological giants improve upon properly exercising their scope of influence.

In the economic sense, the lack of diversity does not only mean the uniformity of the individuals that are employed, but it includes the monopolisation of the technological market by the Big Four. As these companies become harbingers of economic inequalities in the monetization of the Internet industry, cryptocurrency has been proliferating by Internet users in the spirit of decentralisation. With Satoshi Nakamoto’s creation of the first cryptocurrency, Bitcoin, in 2008, it formed the basis of the first ledger distribution economy on the Internet. The use of blockchain as the foundation for cryptocurrency allows for record keeping technology to keep track of money, ownership, contracts, software, etc. that is written and later validated in the ledger (Potts, 2022). Later, proof of work is needed to add these new “blocks” to the blockchain, in order to verify third party transactions, and the parties who “mine” these new blocks get rewarded with respective cryptocurrency as well. Despite the foundation of cryptocurrency to be decentralised, mining operations have consolidated into corporations, so cryptocurrency can feasibly be allocated to its miners, which has the potential for monopolisation. Consequently, less than 10 mining companies possess the majority of the computing power and technology necessary for Bitcoin mining on the network.

Due to the common misconception that the Internet is immaterial and tangible, only recently has public awareness around the physicality of running these lucrative programs escalated. Energy is converted into security during the process of bitcoin mining, which leads to the inherent configuration of the system to intentionally waste energy. Bitcoin generates e-waste as specialised hardware needs to be updated every few years or less, as well as depleting 441 grams of energy per transaction (Digiconomist 2021).

The perception of the physical Internet by cryptocurrency users is crucial in order to vouch for government regulations that upend unsustainable energy sources for cryptocurrency mining and data storage, so the effects of climate change can be mitigated somewhat. One such regulation that could ameliorate cryptocurrencies’ effects on climate change is to penalise cryptocurrency companies and respective mining companies for high levels of energy usage. Another alternative is for cryptocurrencies to substitute proof of work for proof of stake, which validates blocks to the blockchain with third party validators own crypto assets. In this way, proof of stake could eliminate the need for mining altogether.

Since the genesis of the Internet occurred under less than optimal or diverse conditions, these superfluous do not need to be upheld in order to continue innovating and maintaining Internet systems. Society has changed greatly since the birth of the Internet, evolving into something far greater than its original purpose. Therefore, a greater collection of opinions and thoughts need to be heard in order to reflect this. The lack of diversity on the Internet is caused by historical homogeneity, political apathy, and capitalist economic incentives over the best interest of its users. Additionally, the radical change that needs to occur in the information economy of the Internet has to be driven by public indignation and outcry, rather than the current, ineffective drive of corporate interest. The inequality of the information economy gap is perceptible in the statistic that of the 2.9 billion people who do not have access to the Internet, 96% of which are minority voices in developing countries. Unheard voices from these communities could quite very well be the same ones to aid in the regulation and improvement of Internet systems, or at least be motivating factors for their respective governments to ameliorate the digital connectivity chasm. Greater global accessibility has the ability to disintegrate monopolies by encouraging competition among international and indigenous communication corporations and customers. Additionally, more accessibility has the ability to dismantle the information elitism that has been well-observed throughout history and the present. Just a decade after the Internet was introduced in India, the education and research community reached maximum penetration by 65%, followed by business users of 25% and other users of 10% in the government and private households by 1996 (Kanti, Xiaoying, 1998). It is no accident that the Malaysian Prime Minister once stated, “It can be no accident that there is today no wealthy developed country that is information poor, and no information rich country that is poor and underdeveloped” (Nagy, 1991). 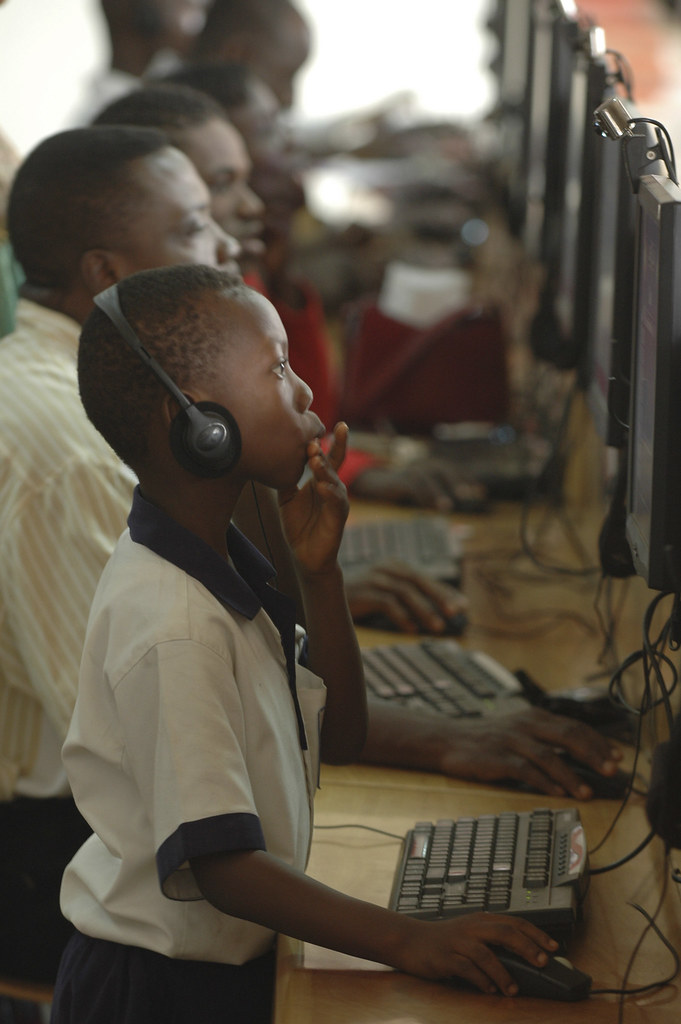 “People work on computers at the Busy Internet computer center in Accra” by World Bank Photo Collection is licensed under CC BY-NC-ND 2.0.

Kanti Srikantaiah, T. and Xiaoying, D. (1998), “The Internet and its impact on developing

hate speech detection. Proceedings of the 57th Annual Meeting of the Association

2022-09-16 YAJIE XU Manan Fri RE 11am Comments Off on Who should be responsible for stopping the spread of problematic content and how?

“Inculcating digital citizenship at Vicenza, Italy, schools” by USAG Italy is licensed under CC BY-NC 2.0.   The limitation of platforms In recent centuries, the Internet has developed most rapidly. However, the prosperity of the Internet also means […]

Digital platforms must be responsible for the toxic content

Introduction With the coming of the web 2.0 era, social media has been fully integrated into individuals’ daily lives and people have stepped into platformization. As the influence of the network and the speed of […]