With the development of the Internet, the industrial information economy underwent a new kind of evolution known as the networked information economy(Benkler, 2007). For information generation, sharing, and usage, Internet communication is based on computer communication networks, fulfilling its goal of socio-cultural communication. Network communication creates a dispersed communication structure by fusing the information-dissemination traits of interpersonal and mass communication, including one-way and two-way communication modalities. Anyone can produce and publish content in this communication framework online. Audiences, which refers to any online users who can be exposed to the content, may quickly and directly share information and voice opinions on communication networks, which have the interactivity of human conversation. The emergence of the Internet has allowed the public to feel the full freedom of expression, but this freedom is also a double-edged sword that leads to the exacerbation of some problems, such as porn content, bullying, and so on. For a long time, governments and some Internet users have seen the problems occurring and getting worse, and they are actively looking for solutions and discussing who is responsible for these online content problems. While Google, Facebook, and their competitors enjoy a certain haven from lawsuits in Europe and the U.S. for content created by Internet users, there is a growing tendency to blame them for spreading violence and other online misconduct on the Internet. And when freedom is abused, society wants someone to be held accountable. Large Internet companies such as Google and Facebook have found that these two ideals have made their casualties. In my opinion, online users, government, and online platforms all need to take responsibility to stop the spreading of personal Attacks and Content such as online bullying, and harassment from all aspects.

To preserve order in the online world and scare anybody who tries to have a detrimental influence on the medium, the government must first assume responsibility for laws. Some governments, however, refuse to take responsibility and instead support the dissemination of certain information. Four teenagers in Milan were seen harassing a mentally challenged youngster with autism in a video that was posted on Google in 2006. The video was released by the autism advocacy group Vivi Down in 2010. (Vivi Down, 2022) The youngster with a mental disability is shown being pushed around, having trash thrown at him, and being called a moron in the video. The video also reveals a lot of onlookers who seem completely unperturbed by this situation. Google Senior Vice President and Chief Legal Affairs Officer, former Google Chief Financial Officer, and Google Global Privacy Advisor were among the three defendants whose convictions were made public in court. Arvind Desikan, a senior product marketing manager for Google, was not found guilty in court. The mobile phone-shot film, which had 5,500 views in the first two months of uploading, was even chosen by Google Italy as one of the funniest video series. Although Google Italy, which has its headquarters in Milan, subsequently took down the film from its website, the prosecution said that Google did not check the video for explicit material and was sluggish to respond to complaints. All of these four Google employees were not-guilty pleas throughout the trial(Reuters, 2012).

This is the first time Google employees have been involved in a court case and found guilty of violating someone’s privacy, claims spokesperson Bill Echikson. Many Google employees believe that this violates the idea of fundamental liberties. He said that Google will appeal the decision since no Google personnel were involved in making, creating, and downloading and as a result, they had no relationship to it(Rferl, 2010).

Additionally, the Italian government is getting ready to take action to severely control social networking and video websites like Google and YouTube (Sterling, 2022). The issue has ignited a contentious discussion about Internet freedom and privacy between Europe and the United States. In such circumstances, online service providers are immune from liability under the Communications Regulatory Act of 1996 in the United States, but there is no equivalent regulation in Europe at that time(U.S. Department of Justice, 2021). The European right to privacy is well expressed in this instance. At the same time, Google’s handling of complaints has occasionally come under fire. The United States has claimed that internet freedom is crucial to democracy and should be safeguarded, in contrast to the European viewpoint. Many individuals think it’s challenging to ignore Google’s internet rights many individuals think it’s tough for Google’s internet rights to respect people’s privacy. The European Commission has said that it is looking into Google’s business practices for antitrust violations.

This is evident in the case of three Google executives who were sentenced in Milan. An Italian court sentenced three Google executives on Feb. 24 for violating personal privacy after Google let a video of a mentally disabled teenager being beaten go viral on its website (Bowen, 2010). The popularity of the Internet, especially social media, has accelerated the spread of information and encouraged human interaction, but it also puts everyone at risk of being swept up in the dark vortex of this virtual world – cyber violence.

The complexity of the case and the intricacies of the Internet’s interests are displayed in front of the public. The European government did not do a great job to improve the legislative system of managing the Internet, the uploaders did not have the moral consciousness of Internet information security, and as a platform party, Google not only did not punish the corresponding employees but also made injustice for them, which seems the whole case is complicated and absurd.

Cyberbullying is a significant issue for internet content. Everyone has the potential to either unwittingly commit cyberviolence or become a victim of it. The UN defines cyberviolence as bullying and other forms of violence committed via digital technology(Alter, 2015) and published several videos to prevent cyberbullying from happening. 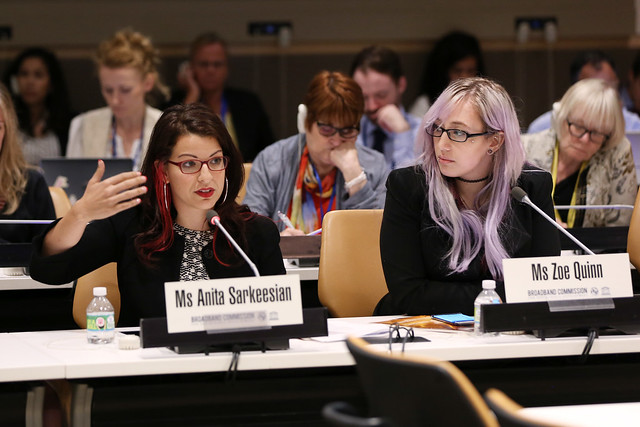 Social networking, chat services, gaming platforms, and mobile devices are all susceptible. It is a pattern of behavior designed to terrorize, provoke, or degrade the target of the attack. Online violence serves as a breeding ground for false information based on the creators’ imagination and the target audience they are seeking to reach, making it challenging for artificial intelligence to distinguish between fact and fictional content.

These days when the Internet is growing more and more popular, cyberbullying is also becoming more prevalent. Most instances of cyberviolence do not violate the law, even though certain severe instances do. This allows some people to act recklessly when they publicly humiliate others and use physical and verbal violence online. Many pieces of information on the Internet are never forgotten because of the persistence of violent material, and other kinds of cyberbullying could be difficult for anybody other than the victim and the bully to recognize. Additionally, since these actions are not punishable by law, social media platforms are required to prevent such occurrences by monitoring the information uploaded. Facebook revealed that ads containing illegal, false, or deceptive content, including fake news, will not be permitted on apps or websites, and Google announced that it will prevent pages containing fake news from appearing on Google’s AdSense advertising platform. This will prevent such websites from receiving a share of ad revenue. Twitter, on the other hand, declared in a statement that it will ban accounts for posting offensive material. Based on its existing policy involving hate speech and other offenses, Twitter took this action. In addition, besides the government and social media platforms, every online user needs to take responsibility to stop the spread of porn, extreme content, and fake news and create a healthy online environment which has been covered in section 230 of the Communications Decency Act.

Insofar as it does not go beyond its editorial responsibilities, it permits the corporation to manage the content existing on its platform to a limited extent in conformity with the law as part of the zeitgeist(Flew, 2019). Thus, it asks every internet user to realize the issue and reject online bullying. At the same time, charity and nonprofit organizations need to supervise any content that will hurt people, and the whole society needs to keep an eye on Internet content.